“It should feel and sound like closing a Mercedes’ door.” 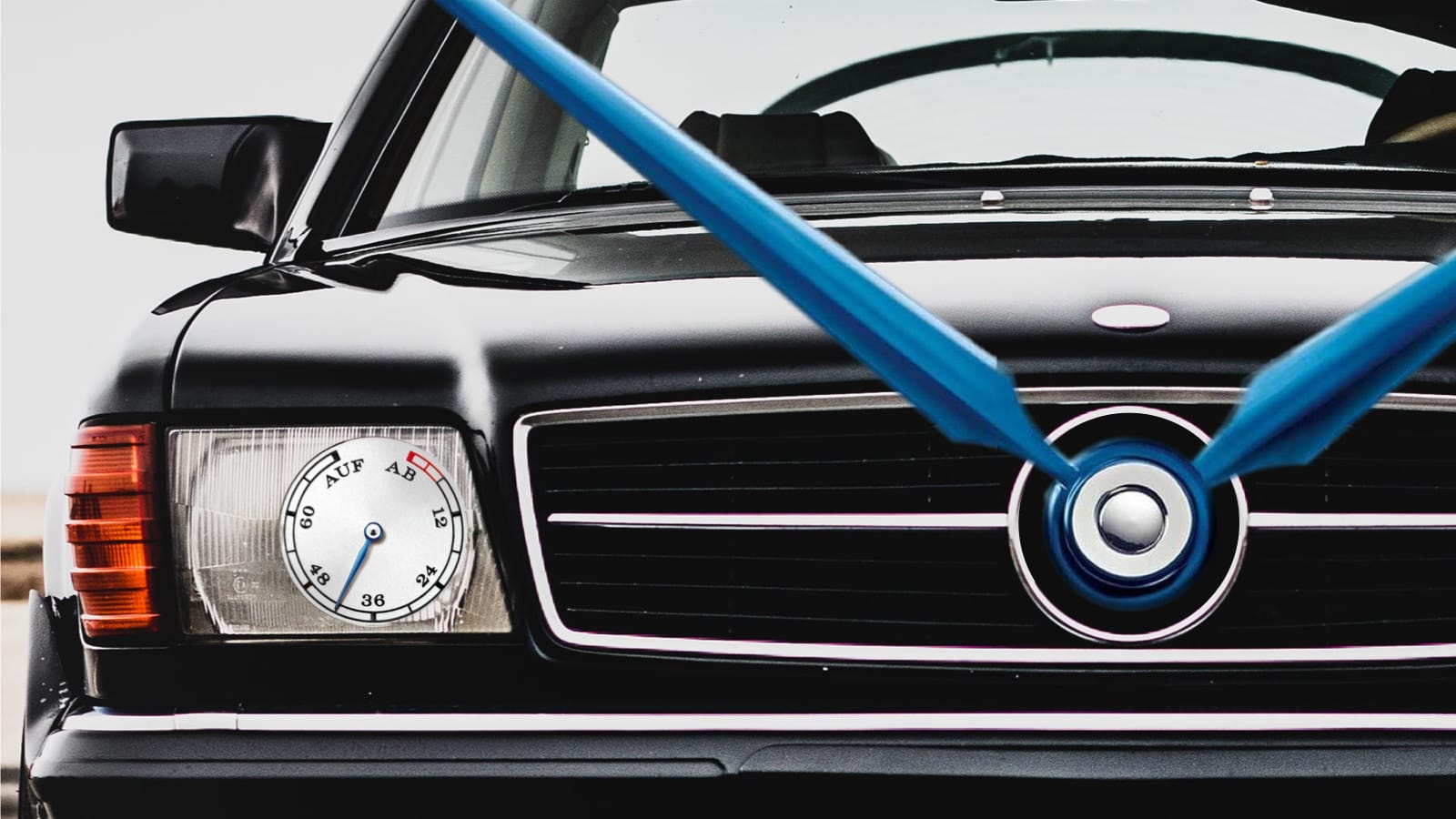 Hearing the name A. Lange & Söhne you could assume this is a brand which is hundreds of years old. This is partially true. It’s a company with a rich history that disappeared for over 40 years and was only revived in 1990. But let’s rewind to the beginning.

The company was founded in 1845 by Ferdinand Adolph Lange as A. Lange & Cie. On the last day of World War II (May 8, 1945) the company buildings were destroyed by a Soviet air raid. In 1948 the company was nationalized and ceased to exist. This could have been the end of the brand and A. Lange & Söhne wasn’t heard of for another 42 years. After the German reunification in 1990 and collapse of the German Democratic Republic (GDR), individual businesses were possible again. Walter Lange, great-grandson of Ferdinand A. Lange, saw this as an opportunity to revive his family’s history. The brand was born again exactly 145 years after Ferdinand A. Lange founded the company. Walter Lange registered the company Lange Uhren GmbH on December 7, 1990 with an address of a former classmate in Glashütte, Saxony. Günther Blümlein, a former executive at IWC and Jaeger-LeCoultre, joined Walter Lange together with a team of 15 people to bring the brand back to life. In a riskful endeavour the first watches were developed and presented on October 24, 1994. 4 years of development hoping that somebody will want these watches – and the world did.

Where does the 1815 collection come from?

The 1815 model collection currently features 13 timepieces with a total of 24 models. The name comes from the birth year of the founder Ferdinand Adolph Lange. The model name “Auf/Ab” is German for “Up/Down” and is used to indicate its power reserve indicator. “Auf” meaning it is fully wound, “Ab” meaning it has no power left. The 1815 was first introduced in 1997, discontinued in 2008, but brought back in 2013 with a redesign.

A Teutonic watch that feels different

If you close your eyes and just hold a Lange watch, it will feel different to other watches. Its a bit heavier, the lugs straight, the bezel smoothly polished. The caseback deeply engraved. Watches from A. Lange & Söhne feel equally qualitative compared to any Swiss watch from the ranks of Patek Philippe. You can feel the “German-ness” in this watch: straightforward, confident, solid. Walter Lange has supposedly said that the watch should feel and sound like “the door of a Mercedes closing”. 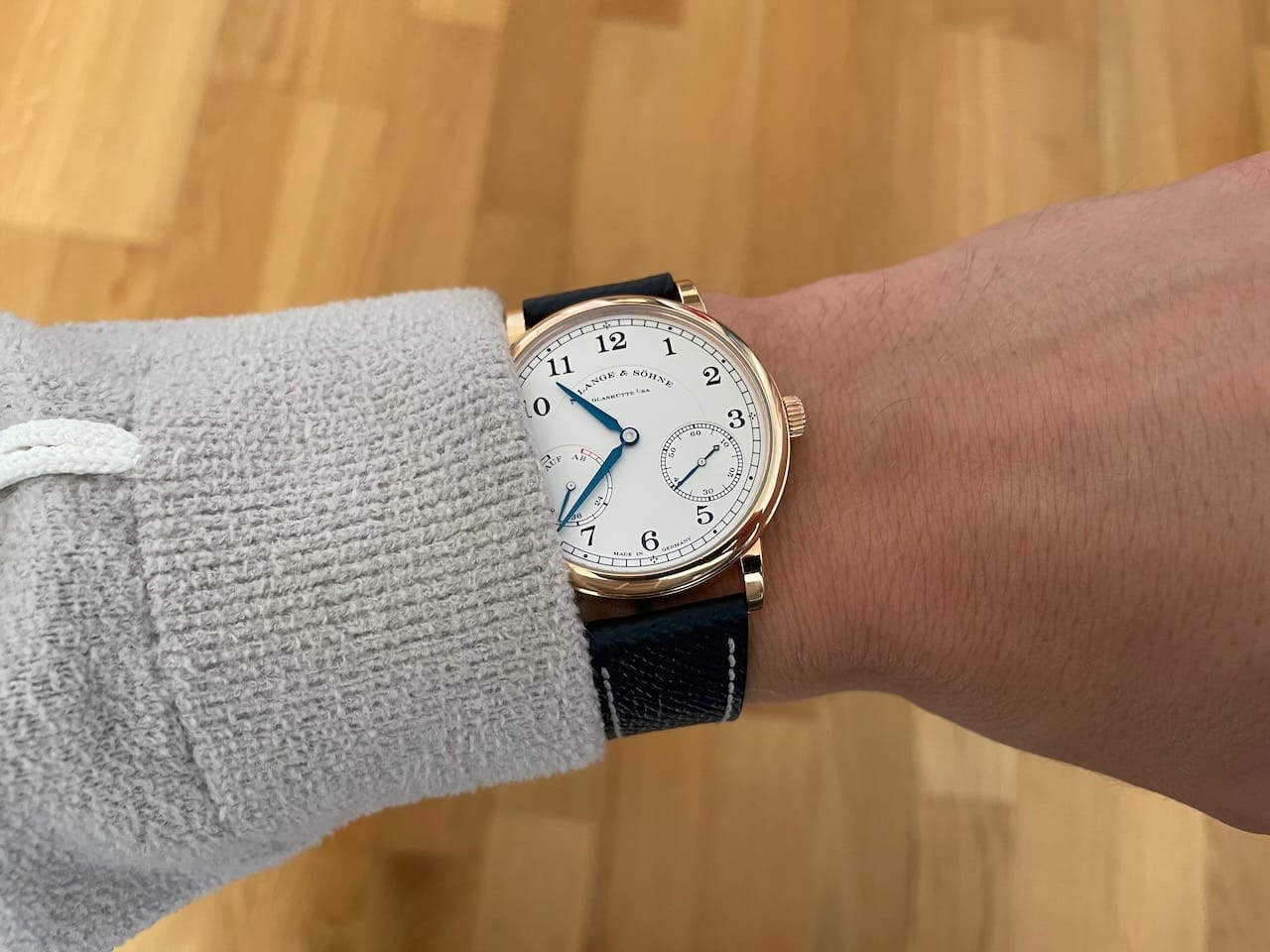 The case is 39 mm in diameter and only 8.7 mm thick. The sapphire crystal is flat and so close to the dial it looks like there is no glass at all. The 5 and 7 numerals are slightly cut off by the power reserve indicator and small seconds, which gives the dial some dynamic. If you turn the watch on its head, you can even see a little face with a mustache. The dial is made from from solid sterling silver and has a matte finish. It’s called argenté (French for “silvery”).

One movement for every watch. You won’t find a movement used in multiple models at A. Lange & Söhne. Built into the 1815 Auf/Ab is the calibre L051.2, which is still based on a patent that Otto Lange developed in 1940, a grandson of Ferdinand A. Lange. A hand-wound movement bringing in 72 hours of power reserve and calmly ticking away at 3 Hz (21,600 A/h). Its only complication is a power reserve indicator which I find highly useful. Just the mechanism for showing the power reserve consists of 36 parts. The whole watch is put together out of 245 parts. The watch is assembled twice to make sure everything works the way it should and that it will last a lifetime. The balance cock is hand-engraved and each engraver has their own style for their floral ornaments. Not only the parts that are visible are finished to the highest degree, also the invisible parts. So if the top of a part is polished, the bottom will also have the same attention to detail. Because that’s what it takes to make one of the best watches in the world, no cutting corners. And what I really like: they do this with every watch. From a simple two-hander watch up to the tourbillons watches with exquisite Handwerkskunst-finishing. 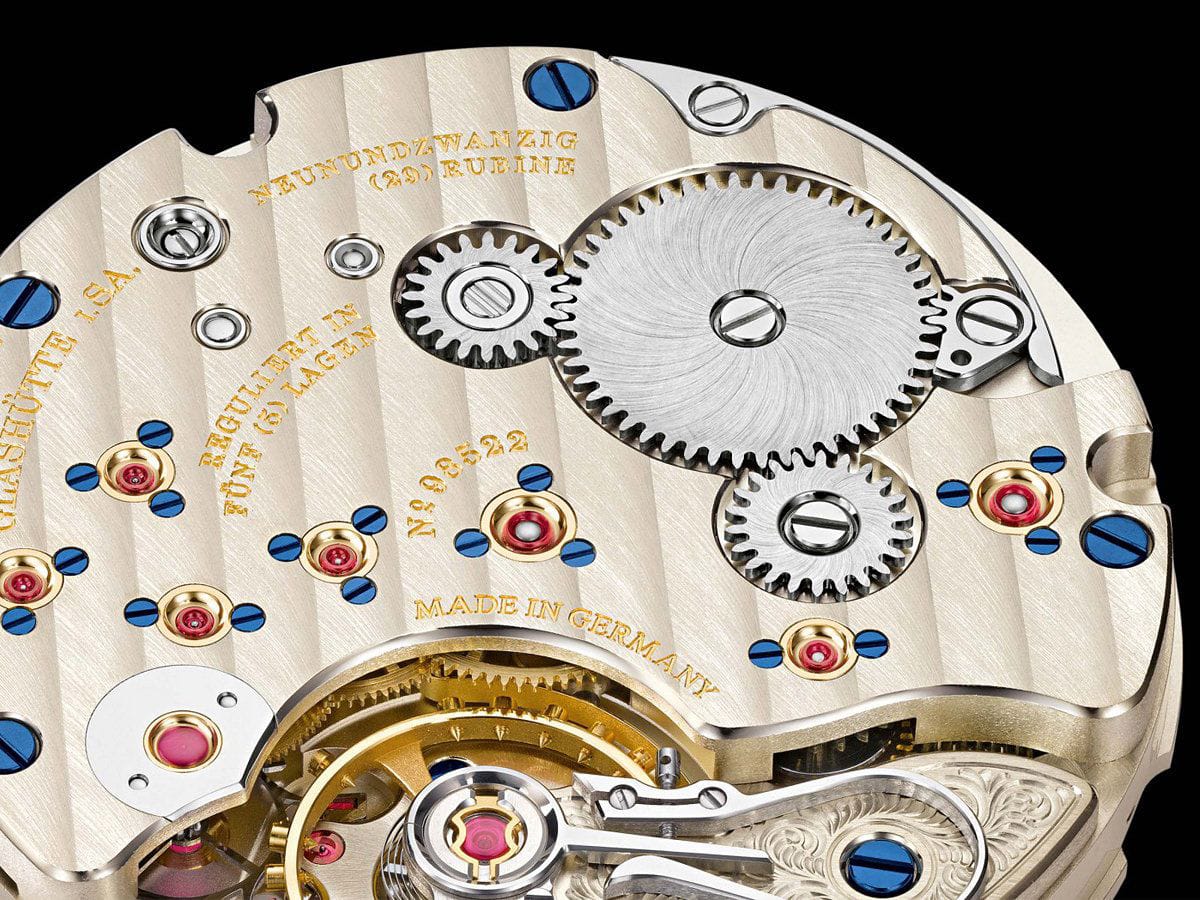 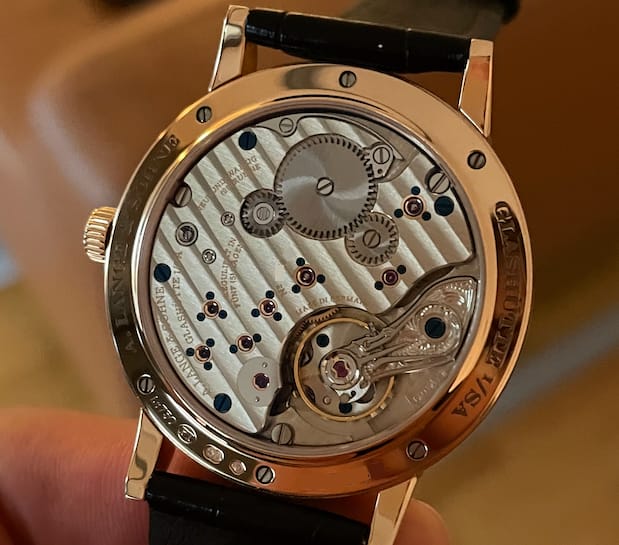 Explanation of two features in this movement

To make this movement even more precise it features two noteworthy technical details: the screwed balance wheel and a swan-neck regulator.

Another great detail is that the small seconds hand resets to zero when the watch doesn’t have any more power. The seconds hand could just stop in the middle of the minute track, but that wouldn’t be nice to look at. When your Lange runs out of power in the drawer, to me it seems like it’s saying “I’m done now, waiting for you to need me again.” The zero reset feature wouldn’t be necessary but it’s this fine detail of A. Lange & Söhne going over the top with engineering something like this that makes me like them so much. The watch seems unspectacular when viewed briefly until you look closer. And once you look even closer, there’s even more to discover.

How the movement sounds

I care a lot about how a watch feels and sounds when operated. A rattling rotor or grinding noise when winding the crown can put me off. Pulling the crown out, winding the movement with a rich ticking-sound, pushing the crown back in. Everything feels like the aforementioned Mercedes door being closed. Pure quality.

Hear how the calibre L051.2 sounds when winding by pressing the play button below.

Fits with many straps

The 1815 seems very dressed-up at first, but when removing the crocodile leather strap and putting it on a plain leather strap it suddenly looks a lot younger, fresher, playful. The blued hands and the small red highlights on the power reserve play well with almost every strap combination. 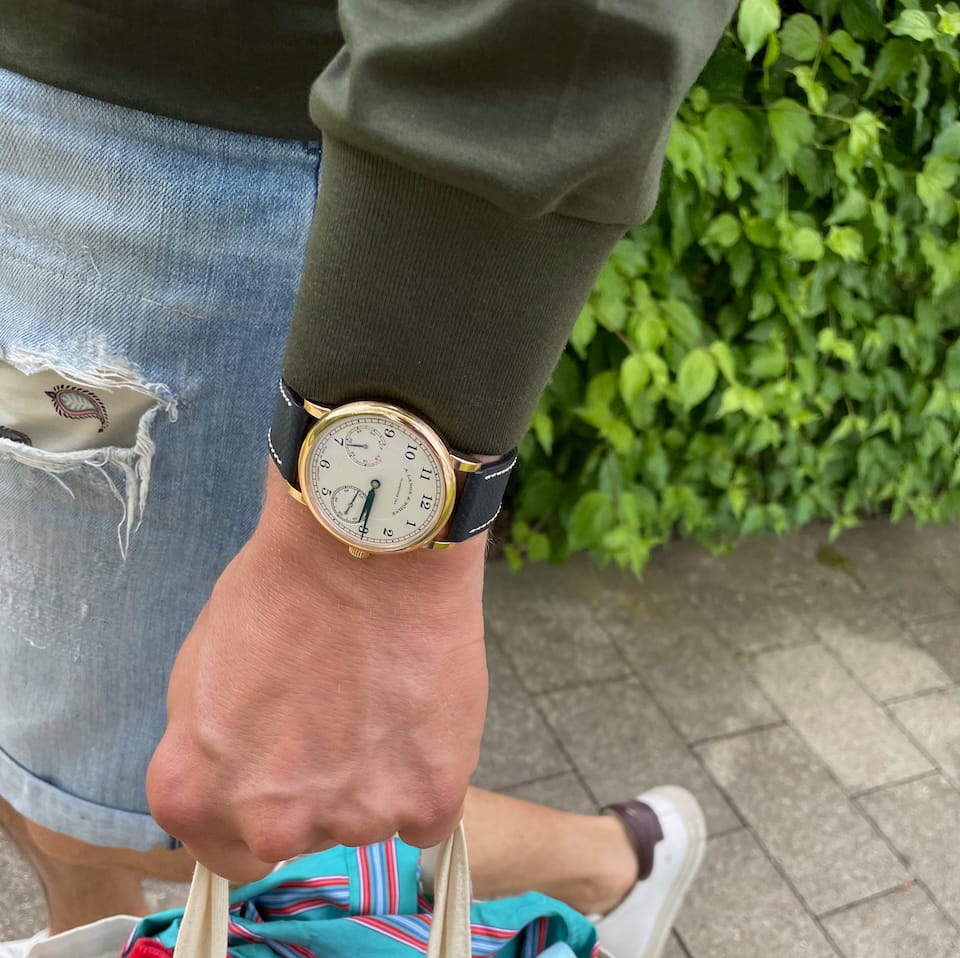 A watch to enjoy for yourself

A watch from A. Lange & Söhne never appears flashy. You can wear it everywhere. Many people don’t understand what’s fascinating about watches until you turn over a Lange watch and the finishing of the movement strikes you. That’s when many have their “Aha”-moment. You feel the weight of the gold and you’ll have to look twice to read the time. Not because the dial is unreadable, but because you’re amazed by how well the watch is finished. Time becomes an afterthought.